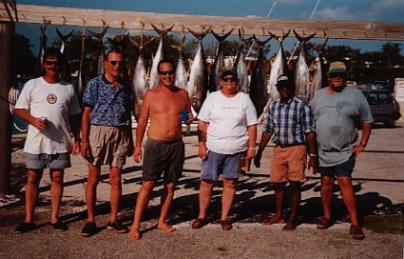 Robert R. Edge, in a letter to Mr. Joseph J. Outerbridge -Bermuda Trade Development Board - dated October 8th 1937 helped to institute the formation of a club. After 9 months of correspondence the first Executive Committee of the Anglers Club was held at the Coral Island Club in Flatts on July 13, 1938. There were 4 members present and 3 absent.

The attendance at early meetings in 1938 - 39 was not great - transportation was by bicycle, train or boat. The following held office until the general election in January 1939 - Louis L. Mowbray was elected as the first President, J.L. Baldridge Vice- President, T.H. Mowbray Secretary/Treasurer, J.E. Pearman and J.P. Green Directors, L/S. Mowbray and H.J. Tucker as Tackle Committee.

The initial fee to be a club member was $5.00 a year or $10 to be a life member. These days the membership costs $25 a year or $40 for a family membership - not a bad rate of increase. It's not known who caught the first fish.

The club had a short history as World War II started in 1939. It wasn't until 1950 that " A few of the Charter Members decided it was high time that the club be revived" according to the 14 April 1950 minutes. 3 Charter members were at the meeting Mr A.R. Gosling, L.S. Mowbray and Mr. H.B. Smith. Mr Gosling acted as President and Mr Mowbray as Secretary/Treasurer. The minutes show that Mr. L.L. Mowbray, the clubs first and only president heretofore, had been forced by ill health to be released from all activities. The first real meeting was then held on 1st May 1950, with Mr Ambrose R. Gosling being sworn in as President. Since then meetings have been held on a regular basis.

It seems that a fire in December 1955 destroyed the original Anglers Club files although the original typed letters and minutes are still around. In about 1970 Pete Perinchief, a long standing member of the club since 1950, prepared a book about the history of club by reading old newspaper clipping, memos and other related files.